Vineeth Sreenivasan was born on 1st October 1985. He is a Playback singer, who mainly works in Malayalam movies. Lets peep into his Biography, Age, Wiki, Marriage, Movies and many more

He studied nursery to 10th standard at Rani Jai Higher Secondary School. He has done his Btech in mechanical engineering from KCG College of Technology, Chennai. He is married to Divya, who is junior to him. They have a child by name Vihaan Divya Vineeth

Vineeth is a playback singer, film director, actor, screenwriter, producer, lyricist, and dubbing artist. His father name is Sreenivasan. He is an actor and screenwriter.

He made debut in the film Kilichundan Mampazham by singing “Kasavinte Thattamittu” song. In 2008 he made acting debut with the film “Cycle”

His directorial debut was with Malarvaadi Arts Club, in 2010, which is also written by him.

He introduced his younger brother Dhyan Sreenivasan as an actor in the film ‘Thira‘ in 2013. 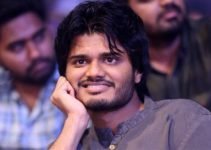