Fenil Umrigar is a Famous Indian Television Actress and Indian Model. She was born on 14 January 1991 in Surat, Gujarat.

Fenil was a Studious girl from Surat, Gujarat. At the age of she gave her first performance at Gandhi Smruti Bhavan in Surat.

Fenil is best known for her role of Sanjana in channel V’s Best Friends Forever? She plays the lead role of Gauri in Kaala Teeka Zee Tv. 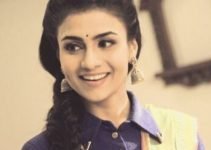